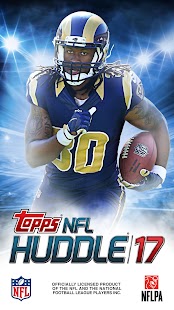 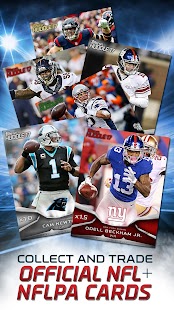 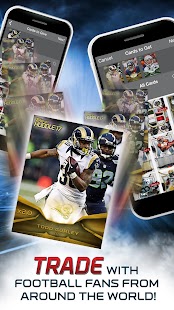 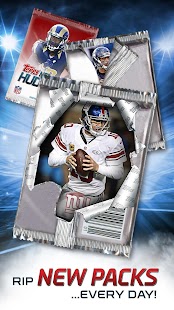 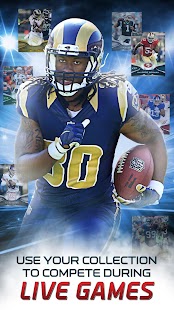 The first ever real-time football trading card game is back and better than ever! Collect and trade all of the best NFL players in hundreds of exclusive card designs. Join in on the 2017 season action by setting your roster alongside live NFL games! Topps HUDDLE carries on a longstanding relationship with the NFL and will be the main source of Topps football cards for years to come!

"Growing up it was always fun collecting cards and I loved playing football, so to be the cover athlete of a unique app like Topps NFL HUDDLE, which combines the two, is something I'm very excited about. I’m looking forward to bringing that fandom to a new generation. And I'll definitely be encouraging fans to collect my new Los Angeles Rams digital cards this season.”- Todd Gurley

NEW FEATURES FOR HUDDLE 17
• Start LEVELING UP today as winning Contests and exchanging cards gets you experience points based on the new LEVEL scoring system.
• New CARD EXCHANGE feature where fans can trade in low-level cards for a higher boosted variant of the same player!
• New STORE DESIGNS that hold unique offers and special packs

COLLECT AND TRADE THOUSANDS OF NFL CARDS!
• Thousands of official digital cards of today’s hottest NFL stars! New player cards released every week based on live performances!
• Hundreds of different art styles from various series to collect. Want a signature card? Retro cards? What about the famous jersey relics? It’s all here.
• Collect and trade hundreds of 2017 season NFL players, along with your favorite veteran and retired players!
• Join the best community of football card collectors in the world! Communicate with players around the world in the FanFeed and propose trades with up to 18 cards!

CONSISTENT RELEASE OF NEW CARDS – OPEN PACKS EVERY DAY FOR FREE!
• New football cards and series released every day based on the live performances of the players! (Yes, you read that right. Every day.)
• Get Free Coins every day to open up packs of cards daily! (Yes, again, you read that right)
• The most dynamic card store in the world! New series, artworks, and editions of cards appear multiple times per day!

SET YOUR LINE UP!
• Set your ultimate line-up every game day with your best HUDDLE player cards and get real-time scores based on live performances!
• Watch live games and compete for points in real time against rival fans from around the world!
• NEW LIVE CONTESTS: now you can compete with other players to win rewards in contests that last from one game to an entire week!
-----