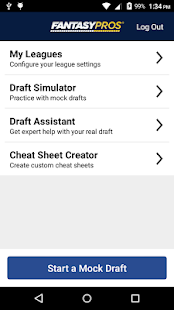 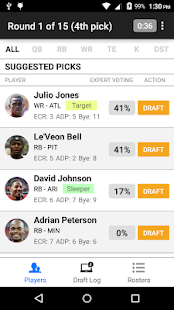 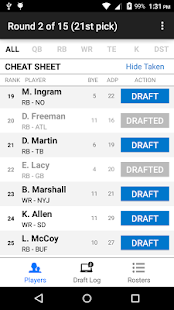 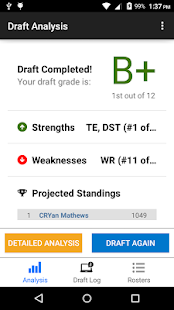 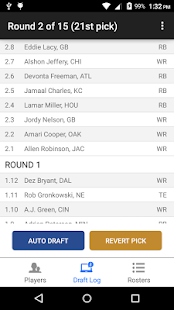 Draft Wizard is a suite of tools that will help you draft like an expert and win your leagues!

---
Created by FantasyPros, the #1 fantasy sports advice and tools provider in the world, this is the only app that will tell you give you expert advice for every single pick and assist you during your real live draft.

What do you get with Draft Wizard?

*Expert Advice*
See who the experts would draft for every single pick to help you make the best possible decision.

*Draft Analyzer*
See how you performed after each draft to identify your strengths and weaknesses.

*Draft Assistant (Manual)* - PRO/MVP/HOF users only
Enter draft pick selections from your real draft to get expert advice on who to pick for your team.

*Draft Assistant (With Sync)* - MVP/HOF users only
Sync with your live draft to get expert advice on who to pick for each round, while your draft unfolds in real-time. Drafted players will be automatically tracked for you.

*Auto-Pick*
Let our computer algorithms make the picks for you so you can sit back, relax, and analyze the draft results.

*Offline Draft Support*
No internet connection needed, just open up the app and start drafting at your own convenience.

*Keeper League Support* (MVP/HOF users only)
Track your league's keepers for each team so you can mock draft with settings that are close to your real thing.

---
FantasyPros is a leader in the fantasy sports space and has won several awards at the FSTA (Fantasy Sports Trade Association):