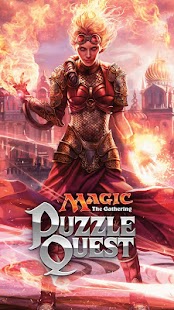 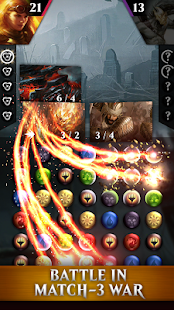 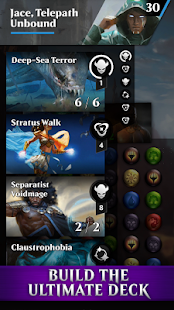 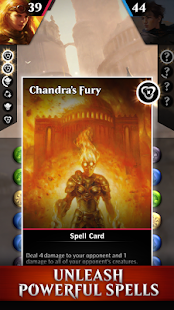 Magic: The Gathering - Puzzle Quest combines the acclaimed card game with the original match-3 RPG to bring the Multiverse to life! Build the ultimate deck, recruit powerful Planeswalkers and gather mana to unleash spells and creatures on your opponents in competitive PVP, Coalitions, events and more!

BATTLE IN ALL-NEW EVENTS AND PVP MATCHES
All new weekly Events and competitive asynchronous PVP matches await! Explore the world of Kaladesh, defend the plane of Innistrad from destruction by Emrakul, or top the leaderboards against Magic The Gathering - Puzzle Quest players around the world! Play against other’s decks and win awesome new rewards including mythic and rare cards from the latest sets! Master each of the five mana colors to become the ultimate player and battle others for even better prizes!

OUTTHINK YOUR RIVALS
Test your skills as you craft the perfect deck and climb to the top of the leaderboards in competitive asynchronous player-versus-player puzzle combat! Use powerful Planeswalkers like Saheeli Rai and overwhelm your opponent with thopters and other deadly machines.

CUSTOMIZE YOUR DECK
Build a worthy deck and battle some of Magic: The Gathering’s most deadly forces. Powerful spells such as Deploy The Gatewatch or ferocious creatures like Gisela, the Broken Blade await combat on the match-3 battlefield. Discover new mechanics like transform and meld to develop new strategies to win!

RECRUIT MIGHTY ALLIES
Choose the most powerful Planeswalkers in the Multiverse and build a deck worthy of these formidable mages. Stay several steps ahead of your enemy with Jace, the master of deception or unleash the fiery fury of Chandra, the pyromancer. Recruit new Planeswalkers like the malevolent Ob Nixilis or two-color mages like the Kiora or Sorin Markov.

UNLEASH YOUR PLANESWALKER
Use your Planeswalker’s unique abilities like Chandra’s Fireball to annihilate your enemies, or Liliana’s Necromancy to raise the dead. Level up your Planeswalker and spells to crush your foes.

FEATURES
• Now with decks from Oath of the Gatewatch, Battle for Zendikar, Shadows Over Innistrad, Eldritch Moon and Kaladesh. Card sets updated regularly.
• Create powerful decks and new strategies to defeat your opponents.
• Experience deep RPG leveling and make your Planeswalker’s abilities even more powerful.
• Snag the top ranks in PVP matches, quick battles and Events to win top rewards.
• Master each of the five colors to gain better rewards in PVP and Event tournaments.