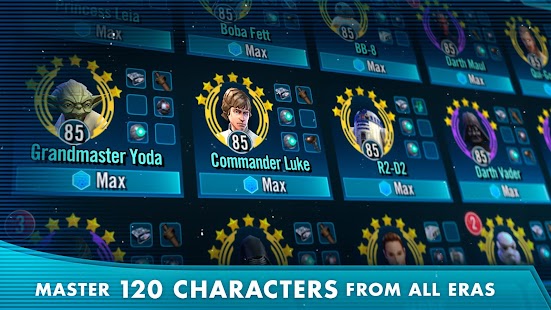 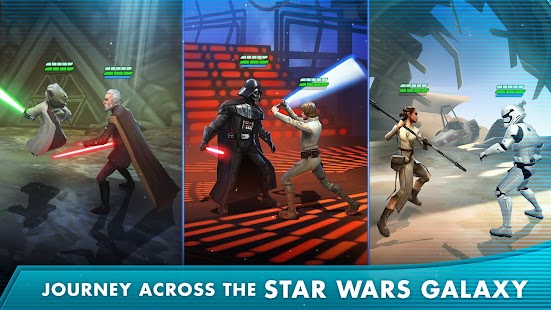 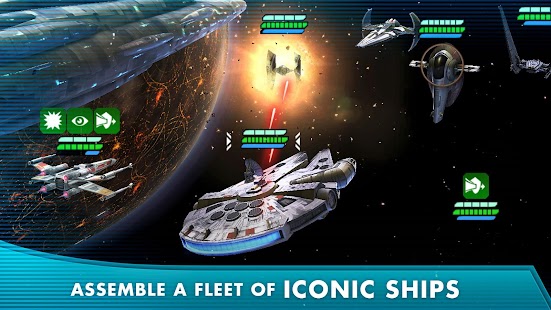 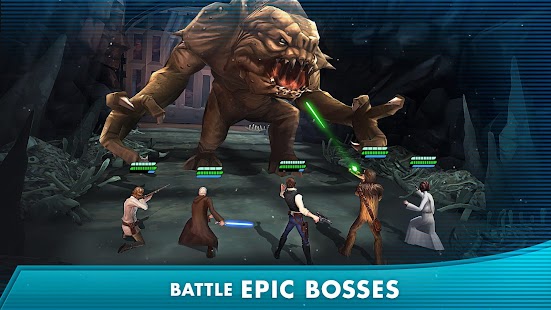 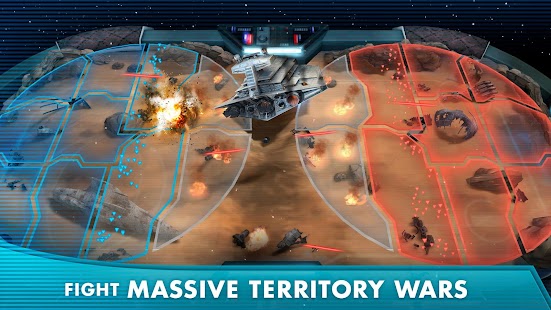 “Visually striking and with adrenaline-pumping Star Wars™ music, Galaxy of Heroes is a must-play for fans for the franchise.” – USA Today

Live your Star Wars™ dreams as you fight with your favorite dark and light side heroes across iconic locations to become master of the galaxy. Create and customize your dream squad using characters from every era, including new characters from Star Wars™: The Force Awakens, Rogue One™: A Star Wars™ Story and Star Wars™: The Last Jedi™. Engage in epic turn-based war, confront giant bosses, progress your characters, and take your game to the next level!

CREATE THE ULTIMATE TEAM
Rebel leaders? Empire stalwarts? It’s your choice as you construct elite light and dark side teams while collecting heroes and other characters from the Star Wars™ universe. Make key strategic moves and pick teammates with complementary abilities to go to war with unbeatable squads!

BECOME MASTER OF THE GALAXY
Defeat opponents and rise to the top as you dominate the galactic hologames in a far-off cantina. Upgrade your heroes’ abilities as you play for even more powerful attacks and bigger wins. Then fight other players in Squad Cantina Battles, PvP Squad Arena, and Squad Tournaments to achieve greatness.

PLAY WITH POWERFUL CHAMPIONS
Make smart, tactical decisions and equip your heroes with the ultimate gear to enhance their damage in galactic war. Unlock fun abilities to make your team unstoppable as you unleash commanding moves like Luke Skywalker’s Bullseye, Jedi Knight Anakin’s Reckless Assault, and others.

ENGAGE IN EPIC SHIP BATTLES
Collect iconic starships and massive Capital Ships to construct your war fleets. Attack all-new challenges, fight through space, and compete in the Fleet Arena to test your prowess. Gather unique upgrade materials for characters, available only as rewards for Ship battles. Each vessel also has its own crew, adding special powers to individual Ships. Recruit powerful characters to create the strongest armada!

RISE TO THE TOP IN GUILDS
Lead Raids with friends and fight against bosses like the Rancor and AAT Tank when you create a customizable Guild. Collaborate with your Guild in Territory Battles where members unleash their entire arsenal of characters and ships against a progressively evolving battlefield. Show your dominance when you face off against other Guilds to conquer territories and top global leaderboards in Territory War.